Readers of this blog know that we like science.  That we hate popular-culture fairy tales and stereotypes.  And that we love to correct awful claims made by DNA testing companies and amateurs on the Interwebs, especially as they pertain to Italians.

Along comes Dr. John De Luca with a truly incredible book.  It's called "Mezzogiorno Mistaken: The Top 10 Myths About Southern Italians."  It made me LOL a dozen times.  It's an instant classic.

Chapters are devoted to:

-Debunking the notion of Northern superiority

-Debunking the "Guido" myth and the "mafia" myth

It does it all with humor and mirth, backed up by science, in a way that is not intrusive.  This is our new favorite book.  One of the most readable we have enjoyed in a while, and a must-have for any Italian you know.

This blog has no financial interest in the book, and we weren't paid anything for this review.  It's simply a REALLY good book on the myths that Southern Italians face.  You can buy it here.
Posted by mooreisbetter at 5:21 PM No comments:

R1b, the Lineage of Kings?

Thought of the day: So many men (who coincidentally bear R1b) love to think that R1b is the lineage of kings and conquerors.  In reality, the data shows it is the lineage of immigrants and commoners. 😂
Posted by mooreisbetter at 11:33 AM No comments:

Long-time readers of this blog know that we have reminded our readers that ethnic calculators or heritage estimates based on DNA tests are not accurate.  We've posted about the concept here, here, here, and here.

We've been particularly critical of Ancestry.com for being just awful for anyone from the center of the European continent (Italy, Germany, France, etc.) and been very critical of 23andme too, even though at least 23andme disclosed that it couldn't spot German or French heritage >80% of the time!

Well, Ancestry just changed the dynamic.  As we've posted before, we consult for a number of different people with well-documented German heritage, dating to the 1600s in small, obscure, out of the way towns.  They have photos, all German cousins, etc.  One of them was previously told by Ancestry that he was 50% Swedish, 25% Italian, and 15% British, and 10% We Don't Know.  This person, again, is 100% German.  This was a bad result before, to say the least.

Well, Ancestry just notified this client that his estimates have changed.  This person that they previously told was Swedish and Italian was just changed to: 96% German ("Germanic Europe" which is Germany, Alsace-Lorraine in France, Austria, Switzerland, and far western Poland). This is impressive.  Another one of our clients experienced a similar change.

Ancestry.com has stolen the thunder from all the other DNA testing companies.  It has found the holy grail of European DNA testing: be able to identify central Europeans.

There are two take aways:

1.  Many companies still have it wrong, and the fact that one individual saw such an enormous change in the estimates -- well, as we've said, you should take any result with a grain of salt until the science is 100% ready for prime time.

2.  But, as of now, if you're north-central European and want an accurate result, Ancestry.com has rocketed to the top of our list.

Now if only they could improve French and Italians...


Posted by mooreisbetter at 6:30 AM No comments:

Europeans are not that diverse genetically.  There is less genetic diversity from Sweden to Spain than there is within any given African village.  This is the result of genetic bottlenecking in Europe.  Europeans are very similar when it comes right down to it.

Is there anyone besides me then, who is sick of Northern Italian researchers putting out YET ANOTHER study that attempts to draw fine line distinctions between the populations of Italy?  I mean, yet another study that splits hairs amongst the Italians?

The latest comes from Alessandro Raveane, whose family originated in the far north of the Veneto.  He attends the University of Pavia.  His Twitter profile emphasizes (in case you don't know) that it's Pavia, Lombardy -- not Pavia, Italy.  Other tweets by Raveane praise the recently deceased genius, Luca Cavalli Sforza, who had a bit of a complex about Italians.

But for the love of God and all things holy, can you please stop the duplicative, derivative, (almost) racist, wedge-splitting, divisive, self-effacing, destructive papers where you attempt to draw fine-line but ultimately arbitrary distinctions between Italian populations?

I love the rather subjectively colored pie charts on page 29 of the BioRXIV pre-print.

But the most laughable of all is this quote:

"Populations in natural crossroads like the Italian peninsula are expected to recapitulate the overall continental diversity, but to date have been systematically understudied."

LOLOLOLOL.  NO.  I know of at least 30 other studies just like this, and that's not even from a systematic search.  Coincidentally every one comes from a Northern Italian author, with an agenda, studying at a Northern Italian university.  Raveane et al had something they wanted to find, and they found it.  What's next, a trip to Costa Smeralda to tell us how unique Sardinians are?  LOL; never seen that before.

Kristen V. Brown is back with an excellent piece for Bloomberg, on home DNA testing, that is remarkably astute for a piece in the popular media.

It confirms much of what readers of this blog have seen posted here repeatedly.  It's so good, it's worth quoting at length:


DNA is great at identifying familial relationships like parents, grandparents, aunts, uncles and even second and third cousins. Beyond that, it gets fuzzy.

The genes that make you a superfast runner or that identify you as Irish are less well-studied. The accuracy of any one test depends on the data your DNA is being compared to. One 2009 journal article said consumer DNA tests were akin to horoscopes exploiting the human tendency to hunt for patterns in meaningless data.

So what does it mean when a test says I’m 25 percent Irish?

It’s a misconception that these tests can tell you where your DNA was in the past.

If a test tells you that you’re 25 percent Irish, what it actually means is that you are genetically similar to other people who are a part of the reference data set of Irish DNA that the company has collected.

Because each company uses a different algorithm and data set, your results may vary based on which company you use.

In other words: Take all this with one very large pinch of salt!
Meanwhile, in Slate, appeared another excellent piece by John Edward Terrell.  Here's the quote for you to read for yourself:


Whatever the motivations, the current popularity of commercial genetic profiling worries me for two reasons. One is that these companies may be promising results they can’t actually deliver.

The notion, for example, that our genes can be used to trace our personal ancestry far back into the past—say, to Genghis Khan, the Emperor Charlemagne, or one of the pharaohs of ancient Egypt—makes little statistical sense. You may disagree, but to me this comes across as selling something more akin to snake oil than science.

What worries me most, however, is that companies offering personal genetic testing customarily seem to report back to those sending along a sample of their spit that they are a mix of different “ethnicities.” This is more than simply statistical nonsense.

We are happy that the mainstream media is finally getting it right, instead of publishing starry eyed pop-sci nonsense about DNA tests.

Don't ever forget: if you come from Central Europe (France, Germany, Italy, or nearby countries), or if you come from a country where there are simply insufficient samples (much of the rest of the world), these DNA tests will wipe your heritage off the map, by telling you that you are something else.  Basically, they're most accurate at the Continental level, unless you happen to come from an island in Europe with massive amounts of people getting tested, i.e., the U.K.

Posted by mooreisbetter at 4:08 PM No comments:

Italy in Roman Times - The Genetics of the Ancient Romans, Part II

Here's a great graphic that I was made aware of.  It shows Italy's ancient borders, during the Classical Era, basically the dawn of recorded history through Greco-Roman times. 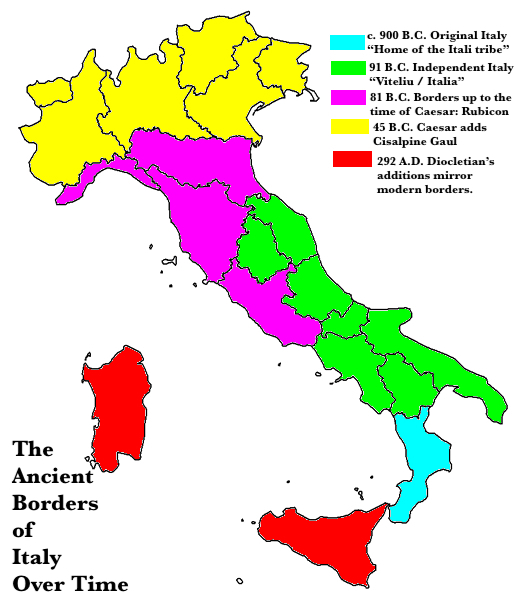 Sure, the ancient borders have been shaded within modern Italian provincial borders, and thus are rough or "rounded to the nearest modern border."  But I've checked this with other maps, and found that it quite accurately depicts Italian borders on the dates it covers.

There are two takeaways, one which is directly related to genetics:

1.  Metternich's oft-repeated slur that Italy is just a geographic expression is nonsense.  There is a 2000+ year history of the peninsula being unified, and 1800 years of Italy even including the islands, like Sicily.

2.  So who then has a claim on being more Italian?  You often hear Northern Italians say they do.

Well, surely it is the provinces that have been known as Italy the longest, those which were romanized first.  And those are, in order, the ones in teal, green, and magenta on the map.

(As the map notes but doesn't make clear: Caesar crossing the Rubicon was so significant because that was the border of Italy!)

If one mentally superimposes on this geopolitical map an actual demographic map showing Roman colonies... 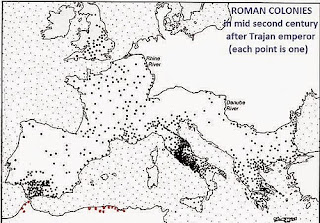 ...one can rather easily see that the current genetic clines of Italy are at least partly explained by which regions were first unified as Italian / Roman.

This brings me to what any college-level history student can tell you: for hundreds of years, Rome was an exporter of humans.  Romans and Latins were wealthy compared to others in the world, and had lots of children, and their dominant political situation meant they could settle colonies at will.

It's time to consider that the genetic "southernness" of certain parts of Italy and the Mediterranean could easily be due to Roman colonies causing people there to resemble south-central Italians -- as opposed to the common yet misguided theory that more recent "invasions" to isolated Italian mountain towns by Saracens caused the people there to genetically resemble the latter.
Posted by mooreisbetter at 4:40 PM 3 comments:

MyHeritage ethnicity estimates seem to be THE WORST of all the major testing companies.

We've received dozens of emails from people of 100% document Italian heritage where MyHeritage says they are 0% Italian.  We've received three screenshots, which we will not share due to privacy concerns.

Something is amiss.  These people showed us documented Italian heritage, 100% Italian cousins, and some were born in Italy.  They show up on MyHeritage as Sardinian, Middle Eastern, Spanish, West Asian -- anything BUT Italian!!!

MyHeritage ain't getting it done.  We would demand a refund kind readers.  It's OK to come close.  As we've noted, all ethnic calculators are pseudo-science.

But MyHeritage isn't hitting the dart board in the bar next door.
Posted by mooreisbetter at 8:42 PM No comments: